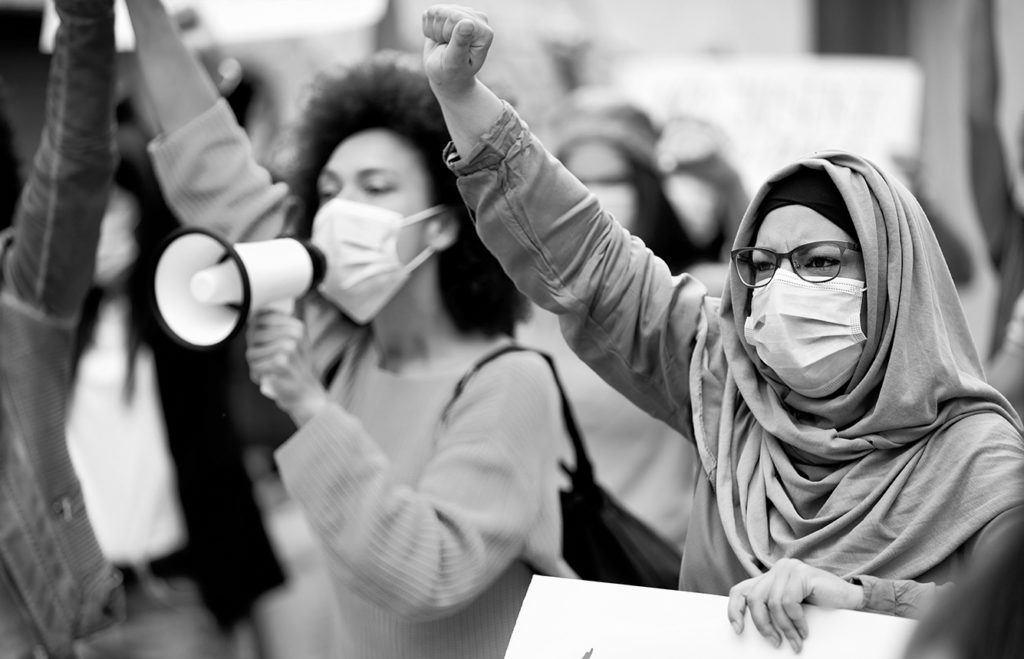 Engaging with identity politics during times of heightened polarization

Brown is an expert on race, gender, and identity politics, and is one of the founders of Women Also Know Stuff.1 After George Floyd’s murder in 2020 she was approached to help people understand how talk about the Black Lives Matter movement and identity politics more broadly in schools and communities.

This was not a new request for Brown nor were these issues new in American politics. Brown’s engagement and efforts to shift the conversations around identity politics have taken written and spoken forms. She has spoken with and delivered trainings to elected officials, nonprofits, school boards, and NGOs. And Brown takes inspiration for her work from the Combahee River Collective, a group of black, queer, feminists working in the 1970s after their work was shut out from the mainstream. Her efforts as a black feminist in the policy arena seek to carry their commitment to diversity forward.

In the wake of George Floyd’s murder and all that came before, Brown was convinced that understanding identity politics was necessary for saving deliberative democracy in the US. Her work has demonstrated that embracing diversity is critical to democratic practices as is an intersectional frame of reference. But she was less sure of how to make her argument approachable and understandable. In the polarized political environment, terms like identity politics, diversity, and intersectionality have become so value laden and triggering for some that it can be difficult to speak about her work in ways that the policy community will understand.

Her work was complicated by her identity. Read as a black woman, her expertise is immediately questioned in many circles. Her credentials and accomplishments are rarely taken as “real”. This has made her angry in the past, but she now thinks that this bias made her a better scholar and teacher. She has had to develop more patient and deliberate ways to explain her perspective and help people “unlearn” common misunderstandings.

Brown spoke with us about several engagement moments connected with her work with the Rendell Center for Civics and Civic Education.[1]

In one she was asked to lead professional development for elementary school teachers by a school board outside of Philadelphia. She spoke to K-6 teachers, who were mostly white, about how to talk with a more diverse student body about the Black Lives Matter movement after George Floyd’s murder. She acted as a Diversity, Equity, and Inclusion consultant, of sorts, during the process by training the participants and then reacting to curriculum they developed. She was able to weigh in to help redirect the curriculum away from a lens reflecting white privilege and toward one more sensitive to the different backgrounds students might have. The first interaction was a little hard to read as she had no prior relationships with the participants and the training was over zoom where some participants were less involved. Nonetheless, the participants were fairly open, and she was able to shift some problematic elements of their initial frame. Her subsequent interactions were more participatory.

In another engagement fostered by the Rendell Center, she gave a talk to a group of faculty and students in Baton Rouge. In this seminar, participants were much more engaged and participatory, which she found more comfortable and rewarding. As she reflected, though, she recounted her commitment to engage despite her level of comfort. Confronting bias is simply built into engaging as a black woman. She sees her role at Women Also Know Stuff as pushing her to move beyond comfort (or lack thereof) to share political science research.

Brown feels a responsibility to speak up on issues of identity politics. She says, “Literally, not figuratively, our democracy is in peril. If we believe that democracy is the best tool for helping marginalized groups have some sort of say so over their lives, then people like me can’t stay silent.”

In her engagement she has found the language of social science to be a useful tool for both establishing her expertise and for tamping down the polarized reactions people sometimes have. If she is initially read as a black woman, with all that entails, she finds that leading with social science, with the “facts”, and coming off as an objective researcher or an expert helps manage this issue. The perceived need to do this used to make her angry but not anymore because she thinks it has made her better. Focusing on how to bring people along each step of the way made her better able to get her points across. In particular, she recognized the need for “unlearning”, and debunking myths, in order to be more persuasive.

She pursues what she describes as an incremental approach. She tries to meet people where they are. While she is committed to challenging both path dependence in scholarship and wrongheaded commonsense in the public, she has found step by step arguments, carefully documenting her strategy and using evidence, to be more impactful. Speaking as an expert can also move highly charged conversations to a different and more dispassionate space where people can engage more thoughtfully. She is hopeful that scholars like her can challenge what we know and improve existing systems that are racist, sexist, homophobic, and more through social science research.

She has found the scholar role to be an arena of agency for her in particularly difficult moments. As lead editor of the journal Politics, Groups, and Identities, she responded to George Floyd’s murder by compiling all articles on Black Live Matter the journal had published. She arranged with the publisher to make the collection ungated and then worked with others on the editorial team to create a micro-syllabus with an introduction that familiarized readers with a long lineage of freedom struggles. Though personally painful, she also found this work to provide an emotional crutch via the agency that scholarship provided in a difficult political moment.

On the other hand, the scholarly community is also one of her audiences. Scholarship has also often ignored the experiences of marginalized people and has its own blindspots vis a vis an intersectional approach. After compiling the material for a syllabus on teaching Black Lives Matter, she and her colleagues were approached by the Washington Posts’ Monkey Cage to write a blogpost on their efforts. How to teach Black Lives Matter[2] both highlighted research on the longstanding exclusion and protests against it and illustrated how little of this story had appeared in established political science journals. It thus revealed the importance of a wider and more inclusive lens in political science. Brown is interested in continuing to foster more inclusivity in the academy but also wary of being used as a token rather than as an agent of change.

Brown reflected with satisfaction on these various engagement experiences. She was happy to have contributed to better curriculum and more productive conversations for elementary schools in her work though the Rendell Center. Yet she acknowledges that there was so much left undone, especially in light of COVID and the sometimes draconian, racist, and ableist policies some schools put in place. She also wondered whether her efforts as an external expert zooming in to spaces like Philadelphia and Baton Rouge made sense as opposed to speakers from within those communities.

More generally, blind spots are endemic. They can be intentional. Brown experienced multiple instances in which people were defensive, offensive, demeaning, and doubled down on being wrong and intolerant. But they need not be intentional. Without a critical mass of women on color in the Maryland state legislature there was a minority enterprise and a women’s enterprise as if there were no women of color enterprises. Similarly, existing policy like the Civil Rights Act could look different if it centered the perspectives of black women. The CROWN Act (first signed into law in California in 2019), for instance, incorporates hair as a protected class of civil rights to remediate black women’s experiences in the workplace.

Brown’s efforts to push for adding voices from different identities to the table is good for deliberative democracy and even better for policy. Seeing policy solutions through intersectionality opens space for solutions that address the complex social world that we inhabit. Brown has found social science to be an effective tool for managing the charged environment surrounding identity politics and for establishing her authority as a black woman in engagement settings. She also, though, sees many blind spots in the academy as well. Most obviously, the exclusion of people of color from the academy has allowed established journals to ignore their experiences. But also, academics often search for theoretical parsimony: the simplest way to explain an issue and the right policy response to that. Adding different voices and the complexity they bring, though, can sometimes generate space in which to manage political issues in a more productive way. Brown is interested in pushing the academic enterprise further in this direction.